MY FATHER, Vum Son Suantak, was born to Pu Ngul Zam and Pi Neam Mang in the Sizang village of Tamdeang on November 9th, 1937. He was their third son. Two of his older brothers died of dysentery before Vum Son was born. He would become the eldest of eight children. Vum Son’s father was a health inspector in the three major townships in the Northern Chin Hills. Vum Son accompanied his father on his numerous trips and thus eventually managed to learn all the major Northern Chin dialects. Beyond learning the dialects of other Chin (Zo), he befriended them learning to relate to different groups of people. 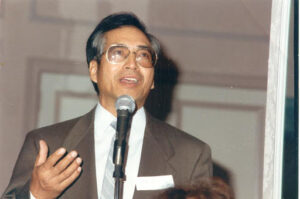 Missionaries had entered the Chin Hills as early as 1812. His parents were devout Christians. Because Christians considered oral history to be pagan, such conveyers of history were forbidden. However, Vum Son’s maternal grandfather had the foresight and kept the oral tradition alive and thus, Vum Son learned about Zo History. This experience would later shape his life as well as those of many others.

After finishing High School in Falam of the Chin Hills, Vum Son matriculated to the U. of Rangoon where he received a B.Sc. in Geology. Again here, Vum Son had to learn a new language, Burmese, and a new culture along with it. There were students from all areas of Burma and hence, Vum Son again learned to relate to different types of people. He was successful. In fact, he became quite popular being named a Chinese Checkers champion during his time in Rangoon.

NidanglaiAfter a national state exam, Vum Son scored very high and was given the opportunity to study in Freiberg, Germany—former East Germany. He completed his MSc. and immediately moved in his Ph.D. studies at Freiberg’s Petroleum Exploration and Mining Academy. Again here, in a continent and culture vastly different from the Chin Hills, Vum Son managed to thrive making friends and earning the respect of his professors. In fact, he was invited to sit in on numerous PhD defences.

In the meantime, Vum Son met my mother, a German native. They soon fell in love. By the time my father received his PhD degree, he was married with two daughters, my sister and I. Because his student visa had expired, the little family went to Burma. Soon, however, this proved to be a mistake. Although all four appreciated being in Kalymyo, Saigang Division and in Rangoon, the climate proved too difficult for my mother. She and her two daughters, my sister and I were granted an exit visa to West Germany. 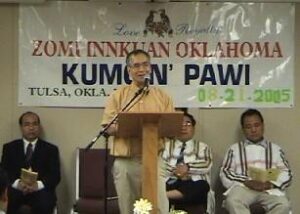 Vum Son after escaping through the jungle of Burma, ended up being held at Sawletha, a Karenni tax and military outpost on the bank of Salween River. He was no allowed to leave. Many of the soldiers there were hungry. Vum Son knew how to catch fish by hand. By doing so, he managed to feed the entire outpost and thus earned the respect of the soldiers holding him. Because of this, he was allowed to leave and fled to Chiang Mai where he contacted the Germany embassy. He finally managed to join his family in West Germany where Vum Son settled until 1978. Vum Son’s company moved the family to the United States. While working on oil rigs, he began actively researching and writing Zo History.

Zo History was published in 1986. It made a great impact on the Zo in that many learned of shared ancestry. Vum Son demonstrated that the Chin of Burma, the Mizoof India and the Kuki or Bawm of Bangladesh stemmed from the same tribe, the Zo and were divided during and after Colonialism. Zo History sparked several movements of reunification, which still thrive today.

After publishing Zo History, my father also became increasingly active in social and political activities. Vum Son served as the president of the Foundation for Democracy in Burma for five years. He was also a member of the Committee for Restoration of Democracy in Burma. He later founded the Chin National Council and the Chin Freedom Coalition. He further formed the Chin Forum whose primary occupation was the drafting of a Constitution for the future Chin State. Further, he served as an advisor to the Zomi Innkuan, Washington DC and was a member of the Board of Consultants of the Political Affairs Committee of Chinland. My father was also focused on Human Rights and became an activist in 1987 addresses the UN and the UNHCR in several countries boarding Burma.

Given his interest in Zo History, he became a member of (ZORO) the Zo Re-unification Organization and founding member of ZOLITE (Zomi Literature Institute). Vum Son believed in non-violence and thus lectured on methods of non-violence resistance. From 1991-1999 he also worked with the NCGUB as well as other organizations. 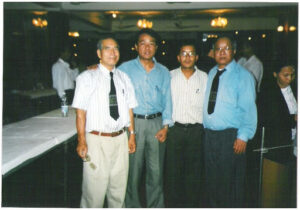 Vum Son was a life-long scholar. When he realized that the armed resistance groups in Burma were actually fostering the military rather than fighting it, he changed his mind and starting campaigning for non-violent resistance. His position was considered controversial, yet he continued to fight for what he believed. He forwarded a thesis entitled the “Ne Win Doctrine” in which he argued that Ne Win, first military dictator of Burma, promoted and encouraged the existence of armed resistance groups. Ne Win understood, argued Vum Son, that in order to justify the military’s violent reactions toward the ethnic minorities as well as the slow, systematic and deliberate ethnic cleansing of Burma’s minorities, armed resistance was necessary.

Besides his political actives, Vum Son also helped hundreds of refugees. Some of the earliest refugees that my father supported were in Germany who came from Burma in the 1970s. Once he moved to the United States and separated from his wife, he opened his home to any and all refugees. He also took custody of his youngest daughter, Liana, who was just twelve years old at that time. In fact, both of his children would soon consider him their only parent—a rather unusual situation for a man from the Chin Hills. After his divorce, he moved to Washington D.C. because of the stable economy but more important, because D.C. had a large Mizo community. Vum Son spoke about this important connection on many occasions crediting the Mizo for embracing him as brethren.

That is, knowing their shared ancestry, Vum Son reached out to this community and was soon integrated.Nidanglai_IISoon, Chin and other refugees starting arriving into the United States and Vum Son took many of them into his home, supported them and aided them in seeking political asylum. Some say that he was the first step from Burma to freedom. Besides Chin refugees, Vum Son’s door was open to all types of people, Blacks, Europeans, other Asian nationalities and Americans. In fact, one day a Vietnamese man knocked on our door, “I was told to see Vum Son and that he would offer me a place to stay.” Apparently, Vin, the Vietnamese man, drove from California to Washington DC in hopes of finding a job hanging wallpaper. He randomly called companies asking for a job and mentioned to one that he did not have a place to live. He was told to call Vum Son. Vin lived with us for a couple of months—free of charge. Vum Son would knock on his door, “Come and eat with us” realizing that Vin was surviving on ramen. Vin gladly joined us for dinner and he eventually managed to set up his new life and soon his wife and kids followed.

One day Vum Son brought home an American man. He also stayed with us and we became friends. In passing Vum Son mentioned to us, “He just got out of prison and had nowhere else to stay.” In fact, Vum Son took care of other colorful characters. Patrick was a French man married to a Mizo. Patrick became a good friend of the family very quickly. However, he was always in legal trouble, once even having personated Vum Son! My father retrieved him from jail on several occasions. Still, my father never judged him and left his door open to Patrick and to many others like him. 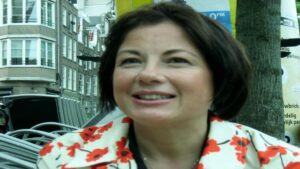 Having left his job working on oilrigs, which kept him away from his children for weeks at a time, he elected to start a new career. He wanted time with his kids, time to pursue his political interests and overall, settle down. He decided to invest in land and to build houses.

Having bought an inexpensive home in a rather shady neighbourhood, Vum Son spent his weekends and evenings renovating the house. During the daytime, he had numerous jobs from working at a grocery store to driving a taxi. In the Chin Hills, most everyone constructs his or her own homes. He had been building all his life and often recalled building huts for his mother. His daughters, my sister and I, built alongside our father. In fact, he taught us everything imaginable about construction and both of us have a large collection of power tools today! Vum Son loved building houses. He would build four single-family homes in the Washington area, the last being his dream home. Vum Son even built one home for his youngest brother, Thawng Ngo who still lives in the house today.

Vum Son was on the brink of his life when he unexpectedly passed away. He had built his dream home. His children had grown up and were each living successful lives. His third grandchild was on the way and he was thrilled. Vum Son continued his love for Zo History and planned additional research including working with genealogist. He also continued being active in numerous organizations and wrote dozens of articles published on the Internet and other publications. Southeast Asian scholars had come to consider him an expert on Zo History and thus he was interviewed by dozens of young researchers regarding Zo History.

The Institute for Social History in Amsterdam has created a special archive for all my father writings, books, interviews and private correspondences.Vum Son was not a religious person. Instead, he believed in the spirit of human beings, their tenacity, resilience, intellect and potential.